Why What Jesus Did Matters 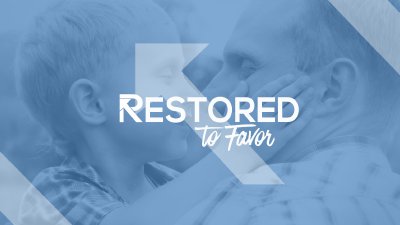 The Bible teaches that God's loving favor is valuable and that it is to be chosen over silver and gold. Many individuals in the Bible discovered that with God's favor came true life, salvation, promotion and victory. Did you know that God has favored you? If you believe in Jesus, you are His child and you are a daily recipient of His loving favor! In this message, you will be encouraged to let this foundational truth impact every area of your life. #FAVOR

In the Bible, Joseph's father loved him so much that he gave him a distinctive coat. This coat said to the world that his father loved him and that he was highly favored. Did you know that you too have been given a coat of favor? The day that you believed in Jesus, your Heavenly Father wrapped His coat of favor around you to tell the world that you are loved, approved, valued and accepted in His eyes! In this message, you will be encouraged about the loving FAVOR that Jesus brought to the world and the power that is released in the lives of those that believe in Him! #FAVOR #HisLovingFavor

The day that you believed in Jesus, God poured out His grace and special FAVOR on you and it made you a new person in God's eyes. Now, as a child of God, His favor is with you everyday! The question is, do you see yourself that way? In this message, you will be encouraged about the powerful change and transformation that takes place in our lives when we choose to adopt a "favor mindset" and think in line with what the Bible says. #favor #HisLovingFavor

04 - The Inheritance of Favor

When a person believes in Jesus, they become a child of God and are given an inheritance of FAVOR. Understanding this position in Christ as an heir of God powerfully impacts how we hear God's Word and the way in which we respond in faith to His promises. In this message, you will be encouraged to receive the amazing inheritance of favor that Jesus has made available to all who will believe and receive it. #FAVOR #HisLovingFavor

There are times in life when our hearts and minds can be moved away from a place of rest and internal peace. Even though life can be busy and intense on the outside, God wants us to know that we can be strong and live with His peace on the inside. Now, because of Jesus, we can always return to rest! In this message, you will be encouraged about how to return to rest through the power of God's grace and FAVOR that He supplies us with on a daily basis. #Favor #HisLovingFavor

06 - The Forgiving Power of Jesus

Don't let guilt, shame and regret weigh you down and hold you back. Your destiny is waiting and Jesus stands ready with power to make you free! In this message, you will be encouraged about the forgiving power of Jesus and the price that He paid to make this forgiveness available. The truth is, there is nothing in our past that is greater than His power to redeem and restore and as we receive His forgiving power, it ignites a sincere love for God and a passion to fulfill our God-given destinies. #forgiven

07 - The Healing Power of Jesus

In life, we can go through difficult things that want to mark us and have a negative impact on our hearts and minds. In those moments of hopelessness, Jesus wants to be the HEALER of our broken heart. He has the power to restore our souls, to make us whole and to renew our hopes, visions and dreams. In this message, you will be encouraged about the healing ministry of Jesus and His ability to bring you into God's plans and purposes for your lives. #heartHEALER #restored

08 - The Redeeming Power of Jesus

God has promised to REDEEM and deliver our lives from destruction. Like Joseph and others in the Bible, God has the power to take us from the pit to a place of royalty and influence! In this message, you will be encouraged to look past the low places you may encounter in life to the faithful love of God and His power to redeem and restore! Choosing to do so produces an inner joy and an unstoppable faith that can overcome any trial you may face!

09 - The Renewing Power of Jesus

It's Time to Take Flight! Did you know that the promises of God have lifting power? When we receive God's promises by faith, they empower us to TAKE FLIGHT in life! In other words, when we think and believe in line with what God has said, it gives us strength on the inside to go beyond our previous boundaries and limitations. In this message, you will be encouraged to receive God's promises to RENEW your youth and your strength so that you're ready for what God has in store for you in the next season of your life. #takeflight #youthrenewal