A View from the Bunker 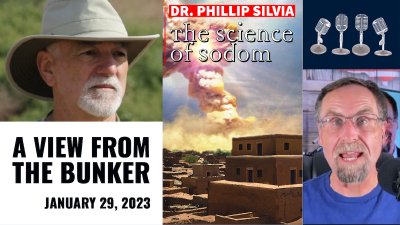 The Science of Sodom

A large city that just happens to be where the Bible places Sodom was destroyed by an air burst in the Middle Bronze Age—just when Abraham would have been in Canaan. https://trinitysouthwest.academia.edu/phillipsilvia is the co-author of https://www.nature.com/articles/s41598-021-97778-3 that stirred up a lot of controversy in September of 2021 by describing a cataclysmic event over the north end of the Dead Sea about 3,700 years ago comparable to the Tunguska blast in 1908. Dr. Silvia is the Director of Scientific Analysis at Tall el-Hammam, an archaeological site in Jordan east of Jericho, about 8 miles northeast of the Dead Sea. He tells us why the evidence on the ground aligns with the Bible’s description of the destruction of Sodom. 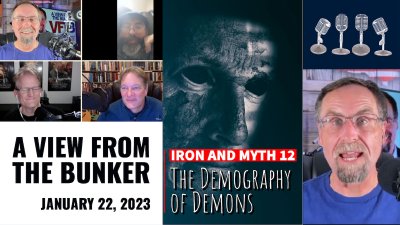 Iron and Myth 12: The Demography of Demons

Who or what are demons? Where do they come from, and how are they different from fallen angels? Author and pastor https://douglasvandorn.com/, bestselling author and award-winning screenwriter https://godawa.com/, and Director of the Institute of Biblical Anthropology https://burtonbeyond.com/ join us for our monthly Iron and Myth round table to discuss evil spirits of the unseen realm—and the connections between the heroes of Greek mythology and the Nephilim of the Bible. 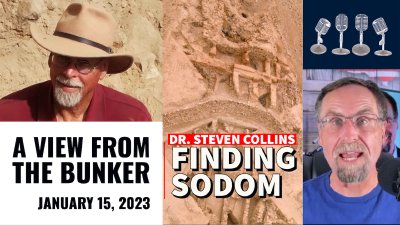 SODOM IS REAL and it’s been found. By the time you see or hear this program, a team will be on its way to Jordan for the final season of excavations at the site. We sat down with Dr. Steven Collins, author of Discovering the City of Sodom and Co-Director of the Tall el-Hammam Excavation Project. He shared with us the excitement of uncovering a site that was one of the most important Bronze Age cities in the Levant, and he explained the significance of the massive field of dolmens, megalithic funerary monuments probably used in rituals for a cult of the dead, at the base of the city. 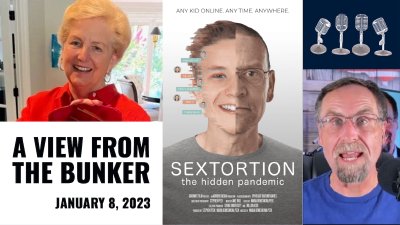 CONSTANT ACCESS to the Internet has exposed an entire generation of children to predators in ways that are difficult to imagine.  Opal Singleton-Hendershot, CEO of https://millionkids.org/ and author of the books https://amzn.to/3xeolok and https://amzn.to/3ijbgtt, joins us to discuss the new documentary Sextortion: The Hidden Pandemicand the threat posed by devious predators who use and manipulate kids who don’t realize the dangers hiding on the other side of the screen. Sextortion is available to watch instantly on a number of video services. https://geni.us/sextortion to watch the film. https://millionkids.org/resources to take advantage of some of the online resources recommended for parents by Million Kids. 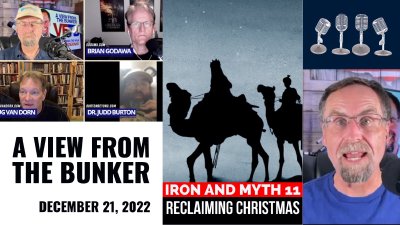 IT’S TIME Christians reclaim Christmas. We live at a time when some Christians are intimidated about wishing other Christians a Merry Christmas, afraid they might accidentally be participating in what was originally a pagan rite. Our monthly Iron and Myth round table says, “So what if it was?” Author and pastor https://douglasvandorn.com/, bestselling author and award-winning screenwriter https://godawa.com/, and Director of the Institute of Biblical Anthropology https://burtonbeyond.com/ discuss the signs in the heavens that pointed to the birth of Jesus, the ways in which the powers and principalities—the gods of the pagan world—have tried to appropriate what was, in actual, historical fact, a Christian celebration from the beginning, and why—biblically—it doesn’t matter. Links: • https://www.askelm.com/star/index.asp by Dr. E. L. Martin (full text available online • )Dr. Michael Heiser’s Naked Bible Podcast: https://drmsh.com/naked-bible-podcast-episode-195-is-christmas-a-pagan-holiday/ • Dr. Michael Heiser - https://drmsh.com/september-11-happy-birthday-to-jesus/ • Brian Godawa's book https://www.amazon.com/god-against-gods-storytelling-imagination-ebook/dp/b01dp7n0w4 • Derek Gilbert - https://www.gilberthouse.org/2022/12/the-truth-about-christmas/ • Derek Gilbert - https://www.derekpgilbert.com/2018/12/23/merry-non-pagan-christmas/ • Pastor Doug Van Dorn’s “Wandering Stars” sermons on the churches of Revelation: • Rev 2:1-7; 3:14-22 ~ Wanderings Stars Part I: Ephesus/Laodicea https://uploads.documents.cimpress.io/v1/uploads/bcb9acbb-1fa6-412c-bdd1-789d3943f72e~110/original?tenant=vbu-digital, https://www.sermonaudio.com/saplayer/playpopup.asp?sid=1321548147750 • Rev 2:8-11; 3:7-13 ~ Wandering Stars (II): Smyrna/Philadelphia https://uploads.documents.cimpress.io/v1/uploads/3ee45b2d-0948-412b-9210-e9d4a36d503e~110/original?tenant=vbu-digital https://www.sermonaudio.com/saplayer/playpopup.asp?sid=192122630945 • Rev 2:12-17; ; 3:1-6 ~ Wandering Stars (III): Pergamum/Sardis https://uploads.documents.cimpress.io/v1/uploads/d3d6336d-cad1-4ca1-9baa-f4ab41a0152d~110/original?tenant=vbu-digital https://www.sermonaudio.com/saplayer/playpopup.asp?sid=11721350141827 • Rev 2:18-29 ~ Wandering Stars (IV): Thyatira https://uploads.documents.cimpress.io/v1/uploads/2a4e7bd4-efbe-4d83-a9fe-13b672a68151~110/original?tenant=vbu-digital, https://www.sermonaudio.com/saplayer/playpopup.asp?sid=12421539412054 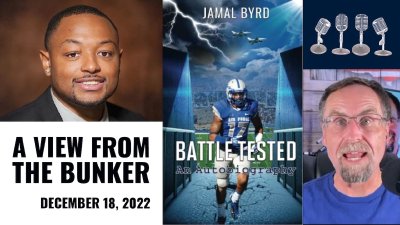 OUR MOST DIFFICULT battles are not fought in the natural realm. That’s what Paul meant when he wrote, “We wrestle not against flesh and blood.” Our guest this week is a young man who has already lived a full lifetime of experience. Jamal Byrd is an Air Force veteran, college athlete, successful businessman, and now author of Battle Tested, his autobiography. He hopes his story will inspire others facing the challenges of 21st-century city youth in America.

THE SPECTACULAR COLLAPSE of cryptocurrency exchange FTX is the latest blow to the battered global crypto market, which has lost more than 60% over the last year. https://www.guymalone.com/, copy editor for Bitcoin magazine, explains the difference between Bitcoin and cryptocurrency, what brought down the empire of Sam Bankman-Fried, and the implications for digital and fiat currencies going forward. 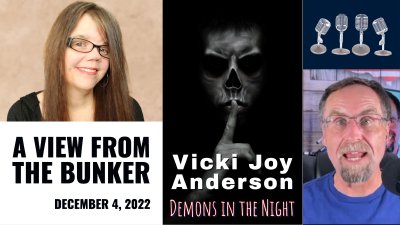 Demons in the Night

Many of us have experienced a particular type of demonic attack. Most of us don’t recognize it for what it is. https://www.vickijoyanderson.com/, author of https://www.gilberthouse.org/store/they-only-come-out-at-night-p496383817, a highly-recommended book on the terrifying phenomenon called Sleep Paralysis, joins us to explain the different between SP and night terrors, how demons literally groom children in their sleep, and what parents can do—especially fathers—to protect their families from these spiritual attacks. Follow Through the Black with Vicki Joy Anderson and Tom Dunn at https://www.youtube.com/@throughtheblack2 (@ThroughTheBlack2). Subscribe and share our YouTube channel at http://www.youtube.com/gilberthouse! Get all of our video and audio content on our new mobile app: http://www.gilberthouse.org/app/! 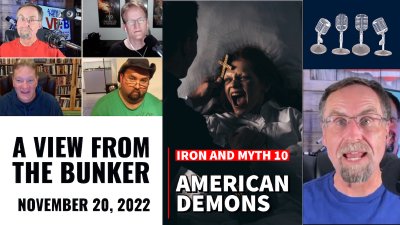 WESTERN CHRISTIANS have been so desensitized to the supernatural that we usually don’t recognize evil when it’s staring us in the face. Joining us for our monthly Iron and Myth series are Brian Godawa (http://www.godawa.com), best-selling author and award-winning screenwriter, Pastor Doug Van Dorn (http://www.douglasvandorn.com), author of Giants: Sons of the Gods, and Dr. Judd Burton (http://www.burtonbeyond.com), author of Interview with the Giant: Ethnohistorical Notes on the Nephilim. We discuss the lack of discernment in the church today, the use of mind and mood altering drugs to open doorways to the spirit realm, and whether it’s possible for a demonic entity can inhabit an artificial intelligence, a website, or even the entire Internet.

The Watchers of Göbekli Tepe

ARCHAEOLOGISTS CALL IT the oldest temple on Earth. If that’s so, who or what was worshiped there? Dr. Aaron Judkins (http://aaronjudkins.com) joins us to share the research behind his new book, https://www.aaronjudkins.com/bookstore. We discuss the evidence for the site’s use as a place of worship, rites that may have been practiced there, and links between the god of Göbekli and the Bible. 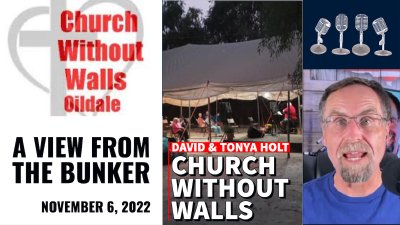 Ministering to the Downtrodden

TOO OFTEN, we Christians are terrible ambassadors for our king. We prefer that those with the greatest needs clean themselves up a bit before admitting them into our congregations. David and Tonya Holt have been on the outside looking in—dealing with various issues like drugs, abuse, and homelessness, which can open to the door for other problems of a spiritual nature. They discuss their ministry, Church Without Walls in Oildale, an impoverished area of Bakersfield, California, what led them to this work, and what it’s like doing church for the hungry, homeless, and abused in a place that literally has no walls. You can follow the work of Opal Singleton-Hendershot at http://millionkids.org. 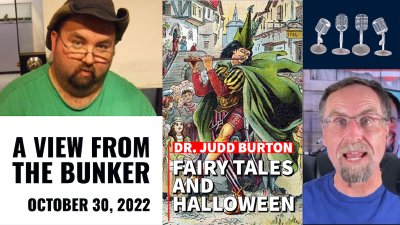 FAIRY TALES aren’t all Mother Goose and Snow White. There is a dark side to those stories that can be traced back to the entities in the unseen realm. Dr. Judd Burton joins us for our annual Halloween episode together, and he explains that the fantastic stories of witches, giants, and trolls that we heard as children can be traced back to the rebellion of the fallen spirits. 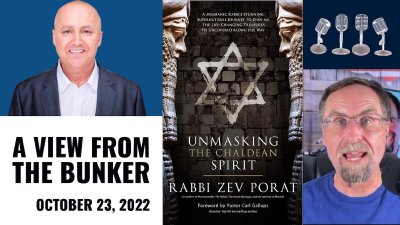 THE CHALDEANS were the people who created the kingdom of Nebuchadnezzar, the king of Babylon who destroyed the Temple of Yahweh in Jerusalem. The spirit behind his kingdom still influences the world today. Messianic Rabbi Zev Porat joins us from Tel Aviv to discuss his new book, Unmasking the Chaldean Spirit. He explains what that spirit is and how it’s manifesting in occult practices around the world—even among religious Jews in Israel today. 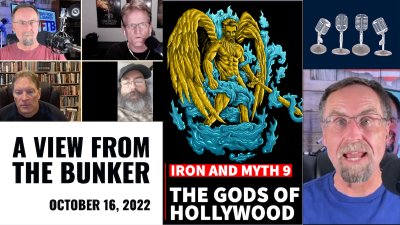 Iron and Myth 9: The Gods of Hollywood

HOLLYWOOD IS drawing our culture into paganism. There is no other way to characterize the types of movies and TV series coming out of the major studios. Joining us for our monthly Iron and Myth series are Brian Godawa http://(www.godawa.com), author of Leviathan and Behemoth and screenwriter of the new film My Son Hunter http://(www.mysonhunter.com), Pastor Doug Van Dorn http://(www.douglasvandorn.com), author of Giants: Sons of the Gods. And Dr. Judd Burton http://(www.burtonbeyond.com), author of Interview with the Giant: Ethnohistorical Notes on the Nephilim. We discuss the religious themes in the films and television series coming out of Hollywood, from Twin Peaks, Stargate SG-1, American Gods, and Sandman to Clash of the Titans, Avengers: Endgame, The Eternals, and Justice League. The bottom line is that pagan religion sells, and Americans seem all too willing to buy. 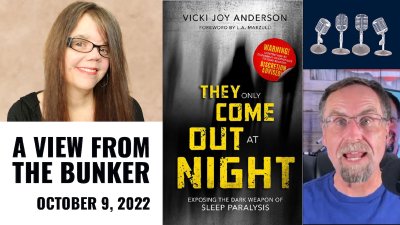 They Only Come Out at Night

MOST OF US have had an experience that can be described as night terrors or sleep paralysis. For some, however, it’s a common, ongoing experience—one that makes going to bed a living hell. Vicki Joy Anderson, author of the new book They Only Come Out at Night: Exposing the Dark Weapon of Sleep Paralysis, digs deep into scripture to shine a light on the dark entities and “shadow people” who terrorize young and old, revealing their methods and motives and, best of all, offering hope by showing how these demonic visitations can be stopped.