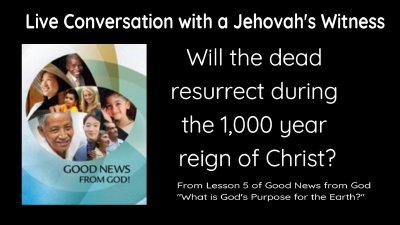 Will the Dead Resurrect During the 1,000 Year Reign of Christ?

Jehovah’s Witnesses teach that during the future millennial reign of Jesus Christ, our dead loved ones will be resurrected to live forever on a paradise earth. They claim that during these 1,000 years, people who may not have received the good news of Jehovah’s Kingdom will be raised from the dead to be given a second opportunity to respond and become subjects under Christ’s kingly reign. It is claimed that if they prove themselves faithful during the 1,000 years and pass the test of Satan at the end, they will be granted everlasting life on the earth, but there are several problems with these claims. First of all, there is no Scripture in the Bible that speaks of the resurrection of dead loved ones during the millennial reign of Christ. The only mention of resurrection is at the beginning of the 1,000 years when faithful Christians will reign. Second, the Scriptures state that it is only after the millennial reign that the unrighteous dead are raised. Revelation 20:5 states: “The rest of the dead did not come to life until the thousand years were completed.” This indicates that those who will be raised in this second group of people are only those who will be facing the “second death” of judgment described in verses 11 through 15 of Revelation 20. Third, we read that although Satan is bound at the beginning of the millennial reign so that he cannot deceive the nations during the 1,000 reign, Satan will be loosed from his prison at the end of the 1,000 years to raise up an army to come against God’s people in one final battle that ends in destruction of all those who have rejected Christ. There is no indication of redemption being offered to unbelievers who have already died prior beginning of the 1,000 years. Last, we read of the nations being deceived to come out against God’s people where they will face their ultimate destruction by God. Verses 11 through 15 of Revelation describes the “great white throne” judgment in which the “dead, the great and the small” are seen “standing before the throne” God. Thus, it seems that there is no second chance to repent for those who have rejected the Gospel of our Lord Jesus Christ prior to death. The Scriptures describe these events this way in Revelation 20:4-15: “Then I saw thrones, and they sat on them, and judgment was given to them. And I saw the souls of those who had been beheaded because of their testimony of Jesus and because of the word of God, and those who had not worshiped the beast or his image, and had not received the mark on their forehead and on their hand; and they came to life and reigned with Christ for a thousand years. The rest of the dead did not come to life until the thousand years were completed. This is the first resurrection. Blessed and holy is the one who has a part in the first resurrection; over these the second death has no power, but they will be priests of God and of Christ and will reign with Him for a thousand years. When the thousand years are completed, Satan will be released from his prison, and will come out to deceive the nations which are in the four corners of the earth, Gog and Magog, to gather them together for the war; the number of them is like the sand of the seashore. And they came up on the broad plain of the earth and surrounded the camp of the saints and the beloved city, and fire came down from heaven and devoured them. And the devil who deceived them was thrown into the lake of fire and brimstone, where the beast and the false prophet are also; and they will be tormented day and night forever and ever. Then I saw a great white throne and Him who sat upon it, from whose presence earth and heaven fled away, and no place was found for them. And I saw the dead, the great and the small, standing before the throne, and books were opened; and another book was opened, which is the book of life; and the dead were judged from the things which were written in the books, according to their deeds. And the sea gave up the dead which were in it, and death and Hades gave up the dead which were in them; and they were judged, every one of them according to their deeds. Then death and Hades were thrown into the lake of fire. This is the second death, the lake of fire. And if anyone’s name was not found written in the book of life, he was thrown into the lake of fire.” 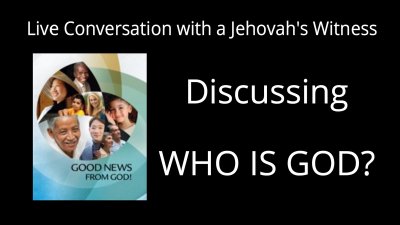 This video features a conversation that my Jehovah’s Witness friend and I had discussing the Watchtower Lesson 2 “Who is God” in their Good News from God and talking about the differences between the Watchtower view of Jehovah God and the Christian view. During our conversation, I asked my Jehovah’s Witness friend about the Watchtower view of the Angel of Jehovah references in the Old Testament. This study on the Angel of the LORD (Jehovah) is fascinating because we see images of a Being who is called both “Jehovah God” and “man” and His descriptions support the early Christian view that saw these references as pictures of the pre-incarnate Christ. 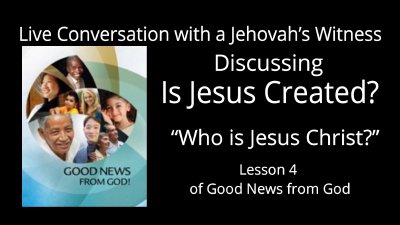 Who is Jesus Christ?

Jehovah’s Witnesses deny that Jesus is uncreated God. Using select Bible verses, the Watchtower teaches that Jesus was “begotten” (John 1:14) as God’s “first-born” (Colossians 1:15-16) Son and “produced” when Jehovah brought “wisdom” forth in creation (Proverbs 8:22-23, 30). Do these Scriptures support the Watchtower’s interpretation of them? Christy disputes these claims with Biblical Greek reference tools and context.