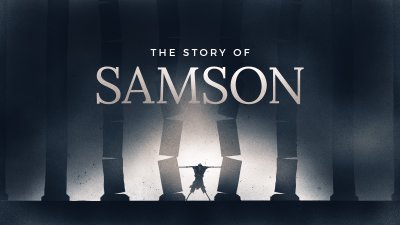 One Last Grace For Samson

We have wondered throughout the entire story of Samson how in the world he ended up in the New Testament’s Hebrews “Hall of Faith”. How did a man who struggled so immensely with his flesh get mentioned in one of the only places in scripture where human beings are exalted as examples of what it means to trust God? This message reveals the answer to this question. From the ashes of his humiliation, Samson commits one final act to the glory of God and, in so doing, fulfills the prophetic destiny assigned to his life. God never gave up on His servant. Well done, Samson. Well done.

A Woman at Her Worst

Up to this point in his story, Samson has managed to avoid complete catastrophe in his dealings with women. That streak comes to an abrupt halt in this message. Women can be incredibly persuasive. God’s daughters use that persuasion for Kingdom good. Women who act independently of the Holy Spirit will use that influence for selfish purposes. This message reveals the demonic heart of Delilah in her intentional betrayal of Samson, the man who loved her.

The Pitfalls of Passion

After a short moment when Samson leaned in to surrender fully to the work of God and experienced a measure of breakthrough, here he goes again back to his old ways. Inexplicably, Samson goes and finds a prostitute down in the Philistine territory of Gaza. After narrowly escaping with his life from that sordid scene, he eventually links up with the infamous Delilah - a sensual relationship that would soon signal the end of Samson’s life. The Scriptures take sexual purity very seriously and in our modern culture the Church must remain as committed as ever to preserving our bodies in honor. This message shows how young people become easily seduced by the enemy’s proven weapon of sexual temptation. May we respond to the grace of God and avoid the pitfalls that are attached to our passions.

The saga of Samson continues as the infuriated enemy brings the fight to him. Up to this point, Samson had been the aggressor, but now the Philistines are seeking to put a final end to God’s flawed servant. This message reveals Samson cooperating with God for the very first time in a spirit of submission and humility. When the Philistines finally capture him, they end up wishing they had left him alone. Watch how God can use the simplest of tools to bring the most astounding victories.

Everyone one of us gets angry from time to time. Anger is not always a sin - even God is revealed in Scripture to be angry at certain things. When we are angry at the wrong things, or when we process anger apart from the Holy Spirit, we usually end up on the wrong side of God’s agenda. This message reveals the words, ways and works of Samson when he begins to operate in fury against the Philistines. Apparently, Samson forgot that vengeance belongs to the Lord. Watch him move a little farther away from the ways of God as he begins to move in unbridled passion to enact his revenge.

The Results of Recklessness

Young people are not widely regarded as being wise. In fact, one common component of being young is that ability to act decisively apart from acting in maturity. Samson and his thirty friends are no exception to this rule. As Samson prepares to hastily marry the girl of his dreams, he enters a week of partying which leads to a rash and ill-advised gamble that would result in many paying a hefty price., This message highlights the painful fall from exhilaration to humiliation. Listening to the Holy Spirit will keep both the young and old from falling into the pit that Samson discovered.

From very early in Samson’s life, we see the war between his calling from God and Samson’s own flesh. While this man was graciously given power and influence from God, he always seemed bent toward self-sabotage as he indulged his carnal appetites. Will God use a person who struggles in the flesh? Will the Holy Spirit anoint for ministry one whose obedience is sporadic? This message begins to unveil the strange partnership between God and Samson. Over all of it is the reality of incredible grace from on high.

An Odd Encounter With God

Sometimes God is in our midst, working on our behalf, and we fail to properly discern Him. We must realize that God didn’t stop being creative after he put the final touches on the physical universe. He still manifests and moves today in ways that the casual or natural eye does not clearly see. As the story of Samson’s parents continues, they find themselves in the middle of an afternoon with God but do not realize it until He vanishes from their midst. This message calls all of us to pursue greater awareness of how God might be working this very moment in our lives.

The story of Samson, the strongman of ancient Israel, begins with his discouraged, oppressed parents. When an angel brought to them a prophetic declaration about the coming birth of a son, hope began to return to their hearts. Eventually that hope would move from their hearts into all of Israel because the prophecy of Samson’s life was that he would set God’s people free from the oppressive Philistines. This message reveals the origin of Samson’s story: an angel, two desperate parents, and a nation in need of rescue.