David: A Man After God's Heart 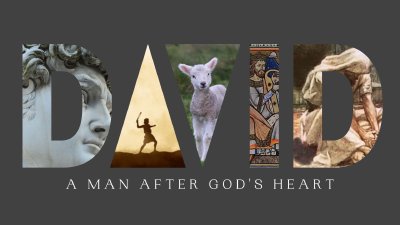 Crown Him with Many Crowns

Confession: Righteous God, you have crowned Jesus Christ as Lord of all. We confess that we have not bowed before him and are slow to acknowledge his rule. We give allegiance to the powers and values of this world and fail to be governed by justice and love. We have failed to love others as you have loved us. In your mercy, forgive us. Give us the grace to crown Jesus as King of every part of our hearts, that we may be loyal ambassadors, obeying His commands and reflecting His love to a watching world. 1. The Kingdom of God starts small: "Do not despise the day of small beginnings, for the Lord rejoices to see the work begin. Zach. 4:10 2. The Kingdom of God grows gently but inevitably 3. The Kingdom of God uses and overcomes the forces of this world

Radical Generosity Prayer of consecration Lord, make me an instrument of your peace. Where there is hatred, let me plant love. Where there is injury, healing. Where there is doubt, faith. Where there is despair, hope. Where there is darkness, light. Where there is sadness, joy. O Great King, grant that I may not so much seek to be consoled, as to console; to be understood, as to understand; to be loved, as to love. For it is in giving that we receive. It is in pardoning that we are pardoned. And it is in dying to self that we are born to Eternal Life. Amen. 1 Samuel 30:1-6 (and 7-25) 1 David and his men reached Ziklag on the third day. Now the Amalekites had raided the Negev and Ziklag. They had attacked Ziklag and burned it, 2 and had taken captive the women and all who were in it, both young and old. They killed none of them, but carried them off as they went on their way. 3 When David and his men came to Ziklag, they found it destroyed by fire and their wives and sons and daughters taken captive. 4 So David and his men wept aloud until they had no strength left to weep. 5 David’s two wives had been captured.... 6 David was greatly distressed because the men were talking of stoning him; each one was bitter in spirit because of his sons and daughters. Godly Leadership: 1. Seeks God (v. 6-8) 2. Serves Even when Suffering (11-15) 3. Selfless in its Generosity (v. 16-25) GRACE CREATED GRATITUDE AND DEFEATED GREED IN DAVID’S HEART 1. Our giving shows us what we are really trusting in. Matt. 6:19-21 2. Greed can never bring satisfaction... “he who loves money never has money enough” Ecc. 5:10 3. Grace frees from Greed and fuels Giving: “And God is able to make all grace abound to you, so that having all sufficiency in all things at all times, you may about in every good work” 2 Cor. 9:8 4. You can’t lose what you’ve already given away: “He is no fool who gives up what he cannot keep to gain what he cannot lose” - Jim Elliot

Sermon Series: David Making God-Centered Decisions Confession: Loving King, our thoughts and motives cannot be hidden from your sight. Our self-pity and pride, our idolatry and sloth, our anger and envy, are laid bare before your eyes and ours. Forgive us for remaining silent and for shrinking back in fear when we should be speaking up for righteousness and truth. We regret the times we have denied our Eternal Savior because we were afraid of men. We regret the times we have gone along with the crowd because we were afraid of what standing for Christ would cost us. We humble ourselves before you and ask that you cover us in the blood of Christ and grant us courage to proudly identify ourselves as followers of Jesus. Renew us in the grace and strength of your Holy Spirit, for the sake of Jesus Christ your Son, our Savior. Amen. 1 Samuel 24:1-22 Wait for the Lord; be strong and take heart and wait for the Lord. Psalm 27:14 Humble yourself under God’s mighty hand that He may lift you up at the right time. 1 Peter 5:6

Life in the Wilderness

Sermon: David - Life in the Wilderness (1 Sam. 22:1-2) Confession: Almighty God and Father of our Lord Jesus Christ, as those who have been delivered from the wrath to come through the blood of Jesus Christ, we come now to confess our sins, and to seek the grace and mercy that can only be found in you. You have called us to be people of faith, hope and love, but we are guilty of unbelief, hopelessness and hatred. When we should have delighted in Jesus Christ, we have sought refuge in created things. When we should have endured trials with patience and hope, we have grumbled against you. When we should have loved you with all of our heart, and our neighbor as ourselves, we have been self-absorbed. Have mercy on us, O God, and bear fruit in us by your Word. Turn our hearts upward to heaven, so that we will live as those who await the glorious appearing of our Savior, Jesus Christ the Lord, in whose name we pray. Amen. The Assurance of Pardoning Grace: Micah 7:18-19 "Who is a God like you, who pardons sin and forgives the transgression of the remnant of his inheritance? You do not stay angry forever but delight to show mercy. You will again have compassion on us; you will tread our sins underfoot and hurl all our iniquities into the depths of the sea.' Life in the Wilderness 1 Samuel 22:1-2 "David left Gath and escaped to the cave of Adullam. When his brothers and his father’s household heard about it, they went down to him there. 2 All those who were in distress or in debt or discontented gathered around him, and he became their commander. About four hundred men were with him." Hosea 2:14 "Therefore, behold, I will allure her, and bring her into the wilderness, and there I will speak tenderly to her. And there I will give her her vineyards and make the Valley of trouble a door of hope."

Aftermath of a Giant Killing

Loneliness, Fear, Anger, Rejection David lost: His status/ reputation His job His wife His safety His mentor His friend Isaiah 41:10 Fear not, for I am with you; be not dismayed, for I am your God; I will strengthen you, I will help you, I will uphold you with my righteous right hand.

1 Samuel 17:1-51 | David and Goliath Facing and Dealing with Fear: 1. No Courage (Saul) 2. Self-Courage (Goliath) "visualizing success", "dig deep in yourself" 3. True Courage (David) having something bigger than your fear - Don't just be "inspired" - Stop trying to be the Hero - Be Heroic IN CHRIST 1 Samuel 17:45-47 | Then David said to the Philistine, “You come to me with a sword and with a spear and with la javelin, but I come to you in the name of the Lord of hosts, the God of the armies of Israel, whom you have defied. This day the Lord will deliver you into my hand, and I will strike you down and cut off your head. And I will give the dead bodies of the host of the Philistines this day to the birds of the air and to the wild beasts of the earth, that all the earth may know that there is a God in Israel, and that all this assembly may know that the Lord saves not with sword and spear. For the battle is the Lord’s, and he will give you into our hand.”

1. God does impossible things (v.1) 2. God uses improbable people 3. God prepares improbable people to do impossible things 1 Samuel 16:1-13 - "The Lord said to Samuel, “How long will you grieve over Saul, since I have rejected him from being king over Israel? Fill your horn with oil, and go. I will send you to Jesse the Bethlehemite, for I have provided for myself a king among his sons.” 2 And Samuel said, “How can I go? If Saul hears it, he will kill me.” And the Lord said, “Take a heifer with you and say, ‘I have come to sacrifice to the Lord.’ 3 And invite Jesse to the sacrifice, and I will show you what you shall do. And you shall anoint for me him whom I declare to you.”4 Samuel did what the Lord commanded and came to Bethlehem. The elders of the citycame to meet him trembling and said, “Do you come peaceably?” 5 And he said, “Peaceably; I have come to sacrifice to the Lord. Consecrate yourselves, and come with me to the sacrifice.” And he consecrated Jesse and his sons and invited them to the sacrifice. 6 When they came, he looked on Eliab and thought, “Surely the Lord's anointed is before him.” 7 But the Lord said to Samuel, “Do not look on his appearance or on the height of his stature, because I have rejected him. For the Lord sees not as man sees: man looks on the outward appearance, but the Lord looks on the heart.” 8 Then Jesse called Abinadab and made him pass before Samuel. And he said, “Neither has the Lord chosen this one.”9 Then Jesse made Shammah pass by. And he said, “Neither has the Lord chosen this one.” 10 And Jesse made seven of his sons pass before Samuel. And Samuel said to Jesse, “The Lord has not chosen these.” 11 Then Samuel said to Jesse, “Are all your sons here?” And he said, “There remains yet the youngest,[a] but behold, he is keeping the sheep.” And Samuel said to Jesse, “Send and get him, for we will not sit down till he comes here.” 12 And he sent and brought him in. Now he was ruddy and had beautiful eyes and was handsome. And the Lord said, “Arise, anoint him, for this is he.” 13 Then Samuel took the horn of oil and anointed him in the midst of his brothers. And the Spirit of the Lord rushed upon David from that day forward. And Samuel rose up and went to Ramah."