Walking in the Way of Jesus 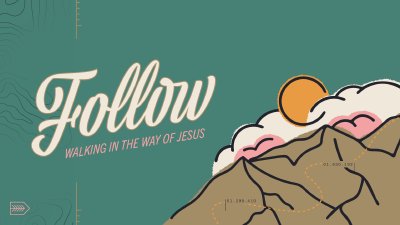 Jesus’ invitation to his followers was to “follow me!” This series explores a number of habits for those who follow Jesus. Matthew 5:9 God blesses those who work for peace, for they will be called the children of God. Matthew 18:15-17. “If another believer sins against you, go privately and point out the offense. If the other person listens and confesses it, you have won that person back. But if you are unsuccessful, take one or two others with you and go back again, so that everything you say may be confirmed by two or three witnesses. If the person still refuses to listen, take your case to the church. Then if he or she won’t accept the church’s decision, treat that person as a pagan or a corrupt tax collector. Matthew 5:23 if you are presenting a sacrifice at the altar in the Temple and you suddenly remember that someone has something against you, leave your sacrifice there at the altar. Go and be reconciled to that person. Then come and offer your sacrifice to God.

1 Corinthians 11:20–28 I find that you bring your divisions to worship—you come together, and instead of eating the Lord’s Supper, you bring in a lot of food from the outside and make pigs of yourselves. Some are left out, and go home hungry. Others have to be carried out, too drunk to walk. I can’t believe it! Don’t you have your own homes to eat and drink in? Why would you stoop to desecrating God’s church? Why would you actually shame God’s poor? I never would have believed you would stoop to this. And I’m not going to stand by and say nothing. Let me go over with you again exactly what goes on in the Lord’s Supper and why it is so centrally important. I received my instructions from the Master himself and passed them on to you. The Master, Jesus, on the night of his betrayal, took bread. Having given thanks, he broke it and said, This is my body, broken for you. Do this to remember me. After supper, he did the same thing with the cup: This cup is my blood, my new covenant with you. Each time you drink this cup, remember me. What you must solemnly realize is that every time you eat this bread and every time you drink this cup, you re-enact in your words and actions the death of the Master. You will be drawn back to this meal again and again until the Master returns. You must never let familiarity breed contempt. Anyone who eats the bread or drinks the cup of the Master irreverently is like part of the crowd that jeered and spit on him at his death. Is that the kind of “remembrance” you want to be part of? Examine your motives, test your heart, come to this meal in holy awe.

Matthew 22:37-38 Love the Lord your God with all your heart, with all your soul, with all your mind. This is the first and greatest commandment. - Jesus John 12:1-11 Six days before the Passover, Jesus came to Bethany, where Lazarus lived, whom Jesus had raised from the dead. Here a dinner was given in Jesus’ honor. Martha served, while Lazarus was among those reclining at the table with him. Then Mary took about a pint of pure nard, an expensive perfume; she poured it on Jesus’ feet and wiped his feet with her hair. And the house was filled with the fragrance of the perfume. But one of his disciples, Judas Iscariot, who was later to betray him, objected, “Why wasn’t this perfume sold and the money given to the poor? It was worth a year’s wages.” He did not say this because he cared about the poor but because he was a thief; as keeper of the money bag, he used to help himself to what was put into it. “Leave her alone,” Jesus replied. “It was intended that she should save this perfume for the day of my burial. You will always have the poor among you, but you will not always have me.” Meanwhile a large crowd of Jews found out that Jesus was there and came, not only because of him but also to see Lazarus, whom he had raised from the dead. So the chief priests made plans to kill Lazarus as well,for on account of him many of the Jews were going over to Jesus and believing in him.

Mark 14 On the way, Jesus told them, “All of you will desert me. For the Scriptures say, ‘God will strike the Shepherd, and the sheep will be scattered.’ But after I am raised from the dead, I will go ahead of you to Galilee and meet you there.” Peter said to him, “Even if everyone else deserts you, I never will.” Jesus replied, “I tell you the truth, Peter—this very night, before the rooster crows twice, you will deny three times that you even know me.” “No!” Peter declared emphatically. “Even if I have to die with you, I will never deny you!” And all the others vowed the same. They took Jesus to the high priest’s home where the leading priests, the elders, and the teachers of religious law had gathered. Meanwhile, Peter followed him at a distance and went right into the high priest’s courtyard. There he sat with the guards, warming himself by the fire. Meanwhile, Peter was in the courtyard below. One of the servant girls who worked for the high priest came by and noticed Peter warming himself at the fire. She looked at him closely and said, “You were one of those with Jesus of Nazareth.” But Peter denied it. “I don’t know what you’re talking about,” he said, and he went out into the entryway. Just then, a rooster crowed. When the servant girl saw him standing there, she began telling the others, “This man is definitely one of them!” But Peter denied it again. A little later some of the other bystanders confronted Peter and said, “You must be one of them, because you are a Galilean.” Peter swore, “A curse on me if I’m lying—I don’t know this man you’re talking about!” And immediately the rooster crowed the second time. Suddenly, Jesus’ words flashed through Peter’s mind: “Before the rooster crows twice, you will deny three times that you even know me.” And he broke down and wept.

Matthew 10:8 “Give as freely as you have received!” Proverbs 3:9-10 Honor the Lord by giving Him the first part of all your income and He will fill your barns to overflow. Luke16:13 No servant can serve two masters. Either he will hate the one and love the other, or he will be devoted to the one and despise the other. You cannot serve both God and Money. Matthew 6:19-23 Do not store up for yourselves treasures on earth, where moth and rust destroy, and where thieves break in and steal. But store up for yourselves treasures in heaven, where moth and rust do not destroy, and where thieves do not break in and steal. For where your treasure is, there your heart will be also.