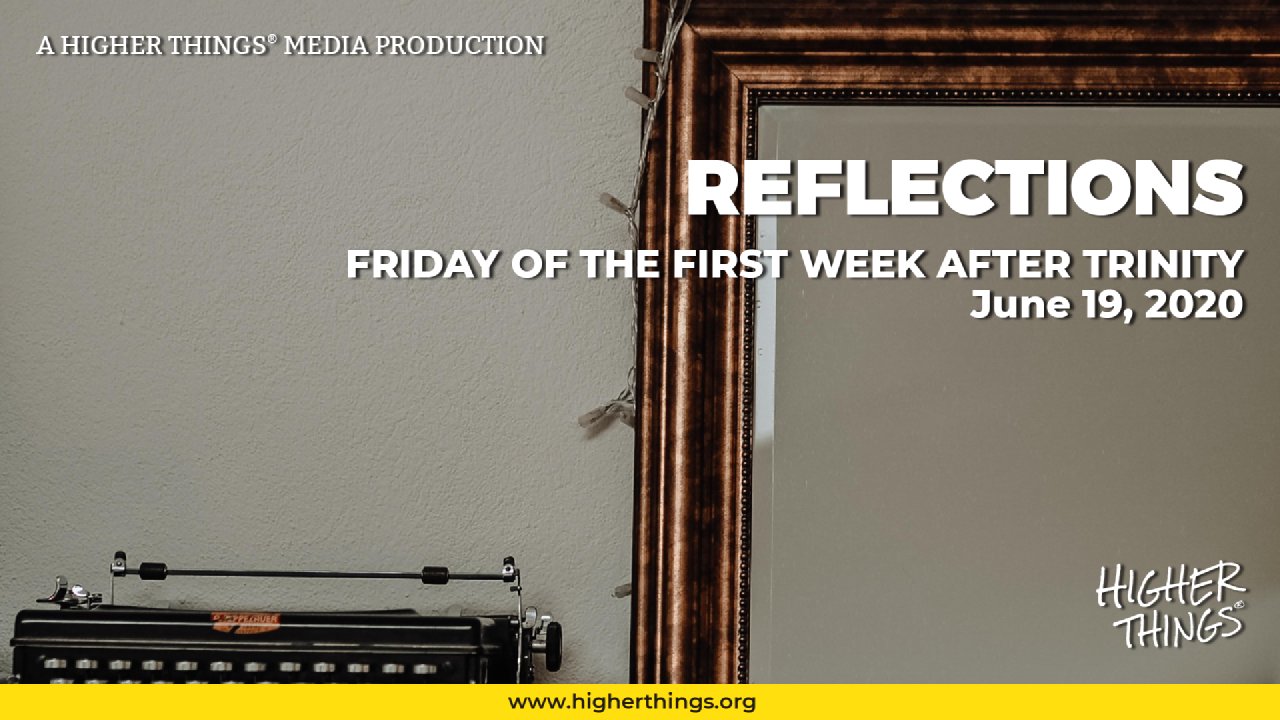 Friday of the First Week after Trinity

Daily Lectionary: Proverbs 22:1-21; John 18:1-14 When Jesus said to them, "I am he," they drew back and fell to the ground. (John 18:6) In the Name + of Jesus. Amen. When Judas, the band of soldiers, and officials sent by the priests and the Pharisees said that they were looking for Jesus, Jesus replied, "I am he." Perhaps this was merely an admission that He is Jesus, or perhaps Jesus is saying the divine name – I AM (Exodus 3:14). Either way, what happens next is amusing. Immediately, the band of soldiers and the Jewish officials fell backwards, right to the ground. Jesus knocked over His enemies with a mere word. They did stand back up, probably shaking a bit. They did arrest Jesus. However, John recorded this amusing detail, so that you might know that Jesus went with these men willingly. Jesus is the true God, the Almighty. Nobody can force Jesus to do anything against His will. Indeed, He really could have come off the Cross, if He wanted to. That's the point. He wanted to go with these men. He chose to die on the Cross. Even though Jesus felt real human fear, He didn't wield His great power to protect Himself. His death was a genuine sacrifice. Your God died for you. He died in your place. He died, so that you don't have to die. Jesus said, "Greater love has no one than this, that someone lay down his life for his friends. You are my friends" (John 15:13-14). As Paul wrote, "One will scarcely die for a righteous person – though perhaps for a good person one would dare even to die – but God shows his love for us in that while we were still sinners, Christ died for us" (Romans 5:7-8). In the Name + of Jesus. Amen. A Lamb goes uncomplaining forth, The guilt of sinners bearing And, laden with the sins of earth, None else the burden sharing; Goes patient on, grows weak and faint, To slaughter led without complaint, That spotless life to offer, He bears the stripes, the wounds, the lies, The mockery, and yet replies, "All this I gladly suffer." ("A Lamb Goes Uncomplaining Forth" LSB 438, st. 1) Audio Reflections Speaker: Pastor René Castillero

The 17th Sunday after Trinity

Today's Reading: Luke 14:1-11 Daily Lectionary: Malachi 2:1-3:5; Matthew 4:1-11 Friend, move up higher. (Luke 14:10) In the Name + of Jesus. Amen. Sometimes Jesus teaches us things that don't seem to have any immediate practical application. For instance, just a few verses before this parable of the wedding feast, He teaches that the kingdom of God is like a mustard seed which grows and gives a place for birds to rest. This is nice, but sometimes, He gives practical advice about how to live your life. I can tell you that this parable is applicable because this exact thing has happened to me. A friend had given a banquet and I sat at the head of the table. I began to eat, and within minutes, was asked to move. It was very embarrassing. I began, with shame, to take my place at a seat of lower status. If I'd just seated myself at any other place, I wouldn't have had this shameful experience. Don't sit at the highest place. Just don't. It wasn't fun. It isn't only about where you sit at a banquet, though. It's also about how you live your life in general. Don't go around thinking that you are the best of the best and deserve more than other people, and certainly don't act like you're worth more than others. The truth is that we are all sinners, and I'm the worst of them. Start there, and you can only be asked to move higher. Those who exalt themselves will be humbled, and those who are humbled will be exalted. This is a major theme of Luke's Gospel. The rich go away empty-handed and the poor have everything given to them. In Christ, the hungry are filled with good things. His ultimate humiliation on the Cross results in the most glorious exaltation of His resurrection. You don't need to think that you are better than anyone else. That won't get you anywhere, and it also isn't true. But you also need to know that the Lord reaches down to those who are in the low places to lift them up. He has reached His hand down to you, and speaks to you as if He is already a friend. In your Baptism, you've been lifted up as His friend. Friend, move up higher. In the Name + of Jesus. Amen. O Lord and Master of my life, take from me a spirit of despondency, sloth, love of money, and idle talk. But give to me, your servant, a spirit of sober-mindedness, humility, patience, and love. Yes, O Lord and King, grant me to see my own sins and not to judge my brother, since you are blessed to the ages. Amen. (Collect for the 17th Sunday after Trinity) Audio Reflections Speaker: Pastor Duane Bamsch

Saturday of the 16th Week after Trinity

Today's Reading: Introit for the 17th Sunday after Trinity (Psalm 119:1-2, 5-6; antiphon: vs.124, 137) Daily Lectionary: Malachi 1:1-14; Matthew 3:1-17 Deal with your servant according to your steadfast love and teach me your statutes. (From the Introit for the 17th Sunday after Trinity) In the Name + of Jesus. Amen. The Lord deals with you according to His steadfast love. This is love that does not fade or falter. This love does not depend on your condition or how you are feeling. The truth is that we might feel good about the Lord one day, and doubtful the next. Our plea then, is that He would deal with us according to His steadfast love, because ours just won't do the trick. Martin Luther, in his 1518 Heidelberg Disputation, wrote that "the love of God does not find, but creates, that which is pleasing to it." The love that humans have for one another is usually based on some sort of quality that the other person has, and these can wax and wane over our lifetimes, causing our love for one another to increase or decrease. People sometimes fall out of love due to a change in another person. Are you fearful that the Lord might stop loving you if you can't keep up with His demands? The Lord's steadfast love does hold onto you because you have done enough good, but because you are enough in Christ Jesus. He did not find you and measure whether or not you fit the bill. He found you and loves you just as you are. He has created you, and He loves that which He creates. Isn't it great to be a creature? Paul speaks of this in Titus 3:5, that "He saved us not because of works done by us in righteousness, but according to His own mercy, by the washing of regeneration and renewal of the Holy Spirit." This is how the Lord has chosen to deal with you! He has come to you and loved you, and will not stop. There was nothing particularly loveable about you, other than you are you. You are His creation. Still not sure? He's baptized you, too, just in case you were wondering if His love might be for everyone else rather than for you. This love is most certainly for you, and is how He has chosen to deal with you. In the Name + of Jesus. Amen. Lord, Your mercy will not leave me; ever will Your truth abide. Then in You I will confide. Since Your Word cannot deceive me, my salvation is to me safe and sure eternally. ("Oh, How Great Is Your Compassion" LSB 559, st.4) Audio Reflections Speaker: Pastor Duane Bamsch