It’s easy to offer little nuggets of advice, support or sympathy. We have a lot of things we like to say to help someone feel better. But, are these little “nuggets” actually true, or are they just easy to say? Is it just possible that “God Never Said That”? 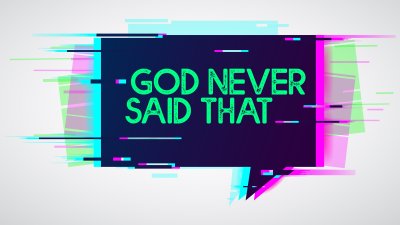 At times, what we believe about God doesn’t seem to match our expectations and experiences. These occasions cause us to question & even doubt what God is doing. John the Baptist had doubts, even though he had announced the arrival of Jesus as the Messiah. Today see learn that God welcomes our doubts & calls us to a deeper level of faith & experience.

God Never Said That - Pt. 5 - Christianity is a Crutch

Occasionally a person disdainful of Christianity will announce that Christianity is nothing more than a crutch for the weak minded. This claim is an attempt to dismiss the value of and hope for faith in Jesus Christ. But is there any truth to this claim? Are we weak and lacking strength and using Christianity to compensate for our shortcomings? Today we’ll explore this claim to see what God, our Creator, says.

Three out of four Americans believe in heaven and/or hell. And 82 percent believe they will spend eternity in heaven. In fact, many believe all people will end up heaven, sometimes called universalism, regardless of how they’ve lived or what they’ve believed. Yet, what is their basis for these beliefs? Today we’ll explore what God really does say, and the implications of what He says versus what many believe.

In the old, old television series Dragnet, Sergeant Joe Friday is sometimes credited with the saying, “Just the facts, ma’am.” It’s a valuable statement, regardless of its origin. When it comes to science and Christianity, there are lots of statements thrown around, but what are the facts? Or, at least, what can we actually affirm about the relationship (or lack of relationship) between science and faith? Are they really incompatible, as some argue? Today we’ll explore this question, and hopefully find some facts we can stand on.

Many people today say their ultimate goal is to be happy, including many Christians. Following that line of thinking, then, if Jesus saves us, he should be taking bad things away from us, protecting us. But, a closer look at the lives of Christians here on earth, not the least being the Apostle Paul and Jesus himself, shows there may be a problem with this – bad things do happen to Christians. What’s wrong with this picture?

God Never Said That - Pt. 1 - All That Matters Is You're A Good Person

We like to use statements like this when something’s happened, and we’re comparing ourselves to someone else or justifying ourselves. But there are problems with a statement like this: Who defines “good”? How do we determine what’s good enough? And what are the consequences if we’re wrong? Is it just possible that this whole idea is carrying us in the wrong direction? Let’s see what God really says!