Preparation of the King - Part 1

3:1 In those days John the Baptist came preaching in the wilderness of Judea, 2 “Repent, for the kingdom of heaven is at hand.” 3 For this is he who was spoken of by the prophet Isaiah when he said, “The voice of one crying in the wilderness: ‘Prepare the way of the Lord; make his paths straight.’” 4 Now John wore a garment of camel's hair and a leather belt around his waist, and his food was locusts and wild honey. 5 Then Jerusalem and all Judea and all the region about the Jordan were going out to him, 6 and they were baptized by him in the river Jordan, confessing their sins. 7 But when he saw many of the Pharisees and Sadducees coming to his baptism, he said to them, “You brood of vipers! Who warned you to flee from the wrath to come? 8 Bear fruit in keeping with repentance. 9 And do not presume to say to yourselves, ‘We have Abraham as our father,’ for I tell you, God is able from these stones to raise up children for Abraham. 10 Even now the axe is laid to the root of the trees. Every tree therefore that does not bear good fruit is cut down and thrown into the fire. 11 “I baptize you with water for repentance, but he who is coming after me is mightier than I, whose sandals I am not worthy to carry. He will baptize you with the Holy Spirit and fire. 12 His winnowing fork is in his hand, and he will clear his threshing floor and gather his wheat into the barn, but the chaff he will burn with unquenchable fire.” 13 Then Jesus came from Galilee to the Jordan to John, to be baptized by him. 14 John would have prevented him, saying, “I need to be baptized by you, and do you come to me?” 15 But Jesus answered him, “Let it be so now, for thus it is fitting for us to fulfill all righteousness.” Then he consented. 16 And when Jesus was baptized, immediately he went up from the water, and behold, the heavens were opened to him, and he saw the Spirit of God descending like a dove and coming to rest on him; 17 and behold, a voice from heaven said, “This is my beloved Son, with whom I am well pleased.”

More from KING JESUS: According to Matthew (Part 1) 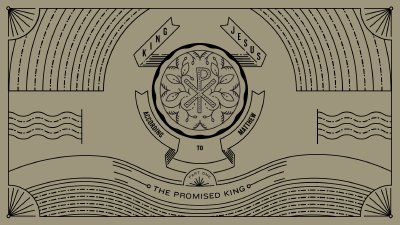 The King Begins His Ministry

12 Now when he heard that John had been arrested, he withdrew into Galilee. 13 And leaving Nazareth he went and lived in Capernaum by the sea, in the territory of Zebulun and Naphtali, 14 so that what was spoken by the prophet Isaiah might be fulfilled: 15 “The land of Zebulun and the land of Naphtali, the way of the sea, beyond the Jordan, Galilee of the Gentiles— 16 the people dwelling in darkness have seen a great light, and for those dwelling in the region and shadow of death, on them a light has dawned.” 17 From that time Jesus began to preach, saying, “Repent, for the kingdom of heaven is at hand.”[a] Jesus Calls the First Disciples 18 While walking by the Sea of Galilee, he saw two brothers, Simon (who is called Peter) and Andrew his brother, casting a net into the sea, for they were fishermen. 19 And he said to them, “Follow me, and I will make you fishers of men.”[b] 20 Immediately they left their nets and followed him. 21 And going on from there he saw two other brothers, James the son of Zebedee and John his brother, in the boat with Zebedee their father, mending their nets, and he called them. 22 Immediately they left the boat and their father and followed him. Jesus Ministers to Great Crowds 23 And he went throughout all Galilee, teaching in their synagogues and proclaiming the gospel of the kingdom and healing every disease and every affliction among the people. 24 So his fame spread throughout all Syria, and they brought him all the sick, those afflicted with various diseases and pains, those oppressed by demons, those having seizures, and paralytics, and he healed them. 25 And great crowds followed him from Galilee and the Decapolis, and from Jerusalem and Judea, and from beyond the Jordan.

Preparation of the King - Part 2

4 Then Jesus was led up by the Spirit into the wilderness to be tempted by the devil. 2 And after fasting forty days and forty nights, he was hungry. 3 And the tempter came and said to him, “If you are the Son of God, command these stones to become loaves of bread.” 4 But he answered, “It is written, “‘Man shall not live by bread alone, but by every word that comes from the mouth of God.’” 5 Then the devil took him to the holy city and set him on the pinnacle of the temple 6 and said to him, “If you are the Son of God, throw yourself down, for it is written, “‘He will command his angels concerning you,’ and “‘On their hands they will bear you up, lest you strike your foot against a stone.’” 7 Jesus said to him, “Again it is written, ‘You shall not put the Lord your God to the test.’” 8 Again, the devil took him to a very high mountain and showed him all the kingdoms of the world and their glory. 9 And he said to him, “All these I will give you, if you will fall down and worship me.” 10 Then Jesus said to him, “Be gone, Satan! For it is written, “‘You shall worship the Lord your God and him only shall you serve.’” 11 Then the devil left him, and behold, angels came and were ministering to him.

The Hope of the World