HOLY WEEK PART II I have always been struck by the obvious reality that in all that went on around the betrayal, arrest, trials, and crucifixion of Jesus the VICTIM was in charge. In an absurd demonstration of overkill, a mob armed with swords, clubs, and torches stormed a garden to arrest a solitary figure who never carried a sword. He strode toward them and in a clear, steady voice announced: “Here I am. Let the others go.” And, the armed-to-the-teeth mob fell backward to the ground! His friends forsook Him, but He’d already made a mental note to forgive and restore them—which He did. The religious elite in a hastily-arranged illegal trial tried to intimidate Him and utterly failing, lost their composure and violated all the moral principles they had spent their professional lives teaching to others. And, the most powerful figure in the region, the Roman governor Pilate, fell completely apart and delivered over a man he knew to be innocent. Throughout the sad, sorry spectacle the VICTIM remained resolute and curiously in charge. And there He was, hanging on a cross. The moment of the terrible price for our forgiveness had arrived. What is He praying? “Father, forgive them for they do not know what they are doing.” The victim is asking forgiveness for those who victimized Him! And then the awful moment of the Great Exchange, the exchange of His righteousness for our guilt arrives: “My God, My God, why have you forsaken me?” But, tragedy turns to triumph: “It is finished! “Mission Accomplished!” Having accomplished the mission, the VICTORIOUS VICTIM prays: “Father, into your hands I commend my spirit.” And, the darkness that fell at Gethsemane falls darker. The earth shakes. The dead walk. And out of the darkness, the glorious light of resurrection awaits. 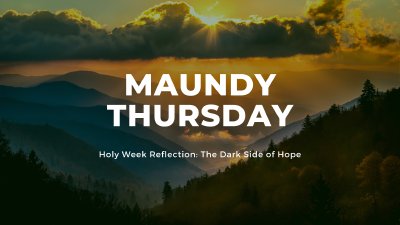 HOLY WEEK REFLECTION: THE DARK SIDE OF HOPE “And going a little farther, He fell on His face and prayed, saying, ‘My Father, if it be possible let this cup pass from me; nevertheless, not as I will but as you will’.” It’s challenging enough to remember that the Son of God “who was, is, and ever more shall be” Divine became for a moment in time also human. It’s more challenging still to know that He faced His Darkest Hour not from the power of His deity but from the vulnerability of His humanity. The Cup repulsed Him and He prayed: “If it be possible, let this cup pass from me.” But, then comes the destiny-changing “NEVERTHELESS, your will be done!” I surely want to grow in grasping the height, breadth, length, and especially at this moment, the DEPTH of the love of God. And overflowing from that awareness, I want to grow in gratitude, wonder, and full surrender. This is the dark side of hope. Tomorrow, “Good” Friday, it gets darker still. But on the other side of all this darkness, the blazing light of the resurrection awaits to chase it all away. “Christ is risen; He is risen indeed!”