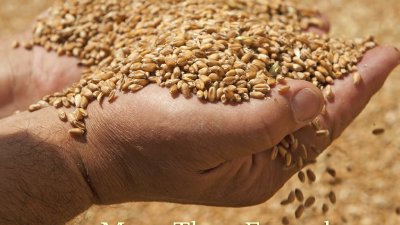 TRUTH: A church that participates fully with God will have more than enough! A “more than enough” church will… 1. Have a desire to do what the Lord commands Exodus 36:1 :: “Bezalel and Oholiab and every craftsman in whom the Lord has put skill and intelligence to know how to do any work in the construction of the sanctuary shall work in accordance with all that the Lord has commanded.” 2. Have some who are skilled to work Exodus 36:2a :: And Moses called Bezalel and Oholiab and every craftsman in whose mind the Lord had put skill, 3. Have some who have the heart to work Exodus 36:2b :: everyone whose heart stirred him up to come to do the work. 4. Have participation from everyone Exodus 36:5 :: and said to Moses, “The people bring much more than enough for doing the work that the Lord has commanded us to do.” 5. Have generosity that must be restrained Exodus 36:6-7 :: So Moses gave command, and word was proclaimed throughout the camp, “Let no man or woman do anything more for the contribution for the sanctuary.” So the people were restrained from bringing, for the material they had was sufficient to do all the work, and more.

More Than Enough - From Never Enough to More than Enough

TRUTH: Pulling yourself up by your bootstraps takes you away from God’s provision 1. Obedience may seem foolish 2. Trouble deepens our reliance upon God 3. God’s provision is astounding

TRUTH: A “more than enough” faith only comes by trusting a “more than enough” God! A “more than enough” faith… 1. Recognizes earthly limitations 2 Kings 5:1 :: Naaman, commander of the army of the king of Syria, was a great man with his master and in high favor, because by him the Lord had given victory to Syria. He was a mighty man of valor, but he was a leper. 2. Has desire to change 2 Kings 5:4 :: So Naaman went in and told his lord, “Thus and so spoke the girl from the land of Israel.” 3. Doesn’t quit in the face of challenge 2 Kings 5:9 :: So Naaman came with his horses and chariots and stood at the door of Elisha’s house. 4. Listens to those who can be trusted 2 Kings 5:13 :: But his servants came near and said to him, “My father, it is a great word the prophet has spoken to you; will you not do it? Has he actually said to you, ‘Wash, and be clean’?” 5. Is willing to act on the unexplainable 2 Kings 5:14 :: So he went down and dipped himself seven times in the Jordan, according to the word of the man of God, and his flesh was restored like the flesh of a little child, and he was clean.