People Can Change: Grace by the Book 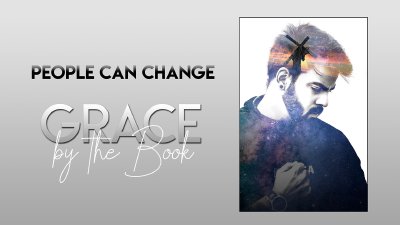 Luke 20:27-40 NLT 27 Then Jesus was approached by some Sadducees—religious leaders who say there is no resurrection from the dead. 28 They posed this question: “Teacher, Moses gave us a law that if a man dies, leaving a wife but no children, his brother should marry the widow and have a child who will carry on the brother’s name. 29 Well, suppose there were seven brothers. The oldest one married and then died without children. 30 So the second brother married the widow, but he also died. 31 Then the third brother married her. This continued with all seven of them, who died without children. 32 Finally, the woman also died. 33 So tell us, whose wife will she be in the resurrection? For all seven were married to her!” 34 Jesus replied, “Marriage is for people here on earth. 35 But in the age to come, those worthy of being raised from the dead will neither marry nor be given in marriage. 36 And they will never die again. In this respect they will be like angels. They are children of God and children of the resurrection. 37 “But now, as to whether the dead will be raised—even Moses proved this when he wrote about the burning bush. Long after Abraham, Isaac, and Jacob had died, he referred to the Lord#20:37a Greek when he wrote about the bush. He referred to the Lord. as ‘the God of Abraham, the God of Isaac, and the God of Jacob.’#20:37b Exod 3:6. 38 So he is the God of the living, not the dead, for they are all alive to him.” 39 “Well said, Teacher!” remarked some of the teachers of religious law who were standing there. 40 And then no one dared to ask him any more questions.

Luke 19:28-44 NLT 28 After telling this story, Jesus went on toward Jerusalem, walking ahead of his disciples. 29 As he came to the towns of Bethphage and Bethany on the Mount of Olives, he sent two disciples ahead. 30 “Go into that village over there,” he told them. “As you enter it, you will see a young donkey tied there that no one has ever ridden. Untie it and bring it here. 31 If anyone asks, ‘Why are you untying that colt?’ just say, ‘The Lord needs it.’” 32 So they went and found the colt, just as Jesus had said. 33 And sure enough, as they were untying it, the owners asked them, “Why are you untying that colt?” 34 And the disciples simply replied, “The Lord needs it.” 35 So they brought the colt to Jesus and threw their garments over it for him to ride on. 36 As he rode along, the crowds spread out their garments on the road ahead of him. 37 When he reached the place where the road started down the Mount of Olives, all of his followers began to shout and sing as they walked along, praising God for all the wonderful miracles they had seen. 38 “Blessings on the King who comes in the name of the Lord!Peace in heaven, and glory in highest heaven!” 39 But some of the Pharisees among the crowd said, “Teacher, rebuke your followers for saying things like that!” 40 He replied, “If they kept quiet, the stones along the road would burst into cheers!” 41 But as he came closer to Jerusalem and saw the city ahead, he began to weep. 42 “How I wish today that you of all people would understand the way to peace. But now it is too late, and peace is hidden from your eyes. 43 Before long your enemies will build ramparts against your walls and encircle you and close in on you from every side. 44 They will crush you into the ground, and your children with you. Your enemies will not leave a single stone in place, because you did not recognize it when God visited you.#19:44 Greek did not recognize the time of your visitation, a reference to the Messiah’s coming.”

Genesis 9:20-27 NLT 20 After the flood, Noah began to cultivate the ground, and he planted a vineyard. 21 One day he drank some wine he had made, and he became drunk and lay naked inside his tent. 22 Ham, the father of Canaan, saw that his father was naked and went outside and told his brothers. 23 Then Shem and Japheth took a robe, held it over their shoulders, and backed into the tent to cover their father. As they did this, they looked the other way so they would not see him naked. 24 When Noah woke up from his stupor, he learned what Ham, his youngest son, had done. 25 Then he cursed Canaan, the son of Ham:“May Canaan be cursed!May he be the lowest of servants to his relatives.” 26 Then Noah said,“May the Lord, the God of Shem, be blessed,and may Canaan be his servant! 27 May God expand the territory of Japheth!May Japheth share the prosperity of Shem,and may Canaan be his servant.”

Interruptions. Life is full of them. Some interruptions are good, and some are not. Some are pleasant, while some are painful. What we often don’t think about is that God sees everything we have ever faced and are going to face. He knows our past and our future—and is fully aware of all that has brought us to where we are today. He sees the potential we have if we choose to surrender to His purpose. One day Jesus interrupted a tax collector by the name of Levi, sitting at his col-lector’s booth. Levi (later known as Matthew -disciple, Gospel-writer) was not expecting a surprise visit, but the Lord’s grace-interruption that day changed Levi’s life forever. Jesus said, “Follow me and be my disciple.” Levi got up and left everything to follow Jesus. Luke 5:27-32 NLT 27 Later, as Jesus left the town, he saw a tax collector named Levi sitting at his tax collector’s booth. “Follow me and be my disciple,” Jesus said to him. 28 So Levi got up, left everything, and followed him. 29 Later, Levi held a banquet in his home with Jesus as the guest of honor. Many of Levi’s fellow tax collectors and other guests also ate with them. 30 But the Pharisees and their teachers of religious law complained bitterly to Jesus’ disciples, “Why do you eat and drink with such scum?” 31 Jesus answered them, “Healthy people don’t need a doctor—sick people do. 32 I have come to call not those who think they are righteous, but those who know they are sinners and need to repent.”

Luke 2:25-35 NLT 25 At that time there was a man in Jerusalem named Simeon. He was righteous and devout and was eagerly waiting for the Messiah to come and rescue Israel. The Holy Spirit was upon him 26 and had revealed to him that he would not die until he had seen the Lord’s Messiah. 27 That day the Spirit led him to the Temple. So when Mary and Joseph came to present the baby Jesus to the Lord as the law required, 28 Simeon was there. He took the child in his arms and praised God, saying, 29 “Sovereign Lord, now let your servant die in peace,as you have promised. 30 I have seen your salvation, 31 which you have prepared for all people. 32 He is a light to reveal God to the nations,and he is the glory of your people Israel!” 33 Jesus’ parents were amazed at what was being said about him. 34 Then Simeon blessed them, and he said to Mary, the baby’s mother, “This child is destined to cause many in Israel to fall, and many others to rise. He has been sent as a sign from God, but many will oppose him. 35 As a result, the deepest thoughts of many hearts will be revealed. And a sword will pierce your very soul.”

Numbers 14:40-45 NLT 40 Then they got up early the next morning and went to the top of the range of hills. “Let’s go,” they said. “We realize that we have sinned, but now we are ready to enter the land the Lord has promised us.” 41 But Moses said, “Why are you now disobeying the Lord’s orders to return to the wilderness? It won’t work. 42 Do not go up into the land now. You will only be crushed by your enemies because the Lord is not with you. 43 When you face the Amalekites and Canaanites in battle, you will be slaughtered. The Lord will abandon you because you have abandoned the Lord.” 44 But the people defiantly pushed ahead toward the hill country, even though neither Moses nor the Ark of the Lord’s Covenant left the camp. 45 Then the Amalekites and the Canaanites who lived in those hills came down and attacked them and chased them back as far as Hormah.

Mark 10:46-52 NLT 46 Then they reached Jericho, and as Jesus and his disciples left town, a large crowd followed him. A blind beggar named Bartimaeus (son of Timaeus) was sitting beside the road. 47 When Bartimaeus heard that Jesus of Nazareth was nearby, he began to shout, “Jesus, Son of David, have mercy on me!” 48 “Be quiet!” many of the people yelled at him.But he only shouted louder, “Son of David, have mercy on me!” 49 When Jesus heard him, he stopped and said, “Tell him to come here.”So they called the blind man. “Cheer up,” they said. “Come on, he’s calling you!” 50 Bartimaeus threw aside his coat, jumped up, and came to Jesus. 51 “What do you want me to do for you?” Jesus asked.“My Rabbi,” the blind man said, “I want to see!” 52 And Jesus said to him, “Go, for your faith has healed you.” Instantly the man could see, and he followed Jesus down the road.

Genesis 6:5-6 NLT 5 The Lord observed the extent of human wickedness on the earth, and he saw that everything they thought or imagined was consistently and totally evil. 6 So the Lord was sorry he had ever made them and put them on the earth. It broke his heart.