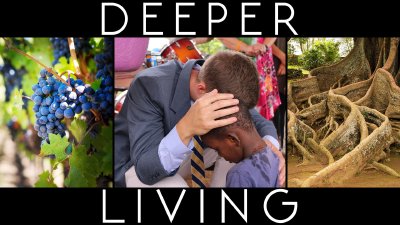 James 2:14-17 NLT 14 What good is it, dear brothers and sisters, if you say you have faith but don’t show it by your actions? Can that kind of faith save anyone? 15 Suppose you see a brother or sister who has no food or clothing, 16 and you say, “Good-bye and have a good day; stay warm and eat well”—but then you don’t give that person any food or clothing. What good does that do? 17 So you see, faith by itself isn’t enough. Unless it produces good deeds, it is dead and useless.

Hebrews 9:11-28 NLT 11 So Christ has now become the High Priest over all the good things that have come. He has entered that greater, more perfect Tabernacle in heaven, which was not made by human hands and is not part of this created world. 12 With his own blood—not the blood of goats and calves—he entered the Most Holy Place once for all time and secured our redemption forever. 13 Under the old system, the blood of goats and bulls and the ashes of a heifer could cleanse people’s bodies from ceremonial impurity. 14 Just think how much more the blood of Christ will purify our consciences from sinful deeds so that we can worship the living God. For by the power of the eternal Spirit, Christ offered himself to God as a perfect sacrifice for our sins. 15 That is why he is the one who mediates a new covenant between God and people, so that all who are called can receive the eternal inheritance God has promised them. For Christ died to set them free from the penalty of the sins they had committed under that first covenant. 16 Now when someone leaves a will, it is necessary to prove that the person who made it is dead. 17 The will goes into effect only after the person’s death. While the person who made it is still alive, the will cannot be put into effect. 18 That is why even the first covenant was put into effect with the blood of an animal. 19 For after Moses had read each of God’s commandments to all the people, he took the blood of calves and goats, along with water, and sprinkled both the book of God’s law and all the people, using hyssop branches and scarlet wool. 20 Then he said, “This blood confirms the covenant God has made with you.” 21 And in the same way, he sprinkled blood on the Tabernacle and on everything used for worship. 22 In fact, according to the law of Moses, nearly everything was purified with blood. For without the shedding of blood, there is no forgiveness. 23 That is why the Tabernacle and everything in it, which were copies of things in heaven, had to be purified by the blood of animals. But the real things in heaven had to be purified with far better sacrifices than the blood of animals. 24 For Christ did not enter into a holy place made with human hands, which was only a copy of the true one in heaven. He entered into heaven itself to appear now before God on our behalf. 25 And he did not enter heaven to offer himself again and again, like the high priest here on earth who enters the Most Holy Place year after year with the blood of an animal. 26 If that had been necessary, Christ would have had to die again and again, ever since the world began. But now, once for all time, he has appeared at the end of the age to remove sin by his own death as a sacrifice. 27 And just as each person is destined to die once and after that comes judgment, 28 so also Christ was offered once for all time as a sacrifice to take away the sins of many people. He will come again, not to deal with our sins, but to bring salvation to all who are eagerly waiting for him.

Bold moves for God happen when we follow in the footsteps of our bold Savior. The Son of God left heaven and came to earth, was given the name ‘Jesus’, and showed us God’s heart. Christ taught, healed, raised the dead, and took our place in death so that every person would have an opportunity to know God and experience salvation. The world wants to sweep us away as though our lives mean nothing. But deeper living draws us to Jesus who understands our weakness and promises us strength in exchange.

2 Timothy 4:1-8 NLT 1 I solemnly urge you in the presence of God and Christ Jesus, who will someday judge the living and the dead when he comes to set up his Kingdom: 2 Preach the word of God. Be prepared, whether the time is favorable or not. Patiently correct, rebuke, and encourage your people with good teaching. 3 For a time is coming when people will no longer listen to sound and wholesome teaching. They will follow their own desires and will look for teachers who will tell them whatever their itching ears want to hear. 4 They will reject the truth and chase after myths. 5 But you should keep a clear mind in every situation. Don’t be afraid of suffering for the Lord. Work at telling others the Good News, and fully carry out the ministry God has given you. 6 As for me, my life has already been poured out as an offering to God. The time of my death is near. 7 I have fought the good fight, I have finished the race, and I have remained faithful. 8 And now the prize awaits me—the crown of righteousness, which the Lord, the righteous Judge, will give me on the day of his return. And the prize is not just for me but for all who eagerly look forward to his appearing.