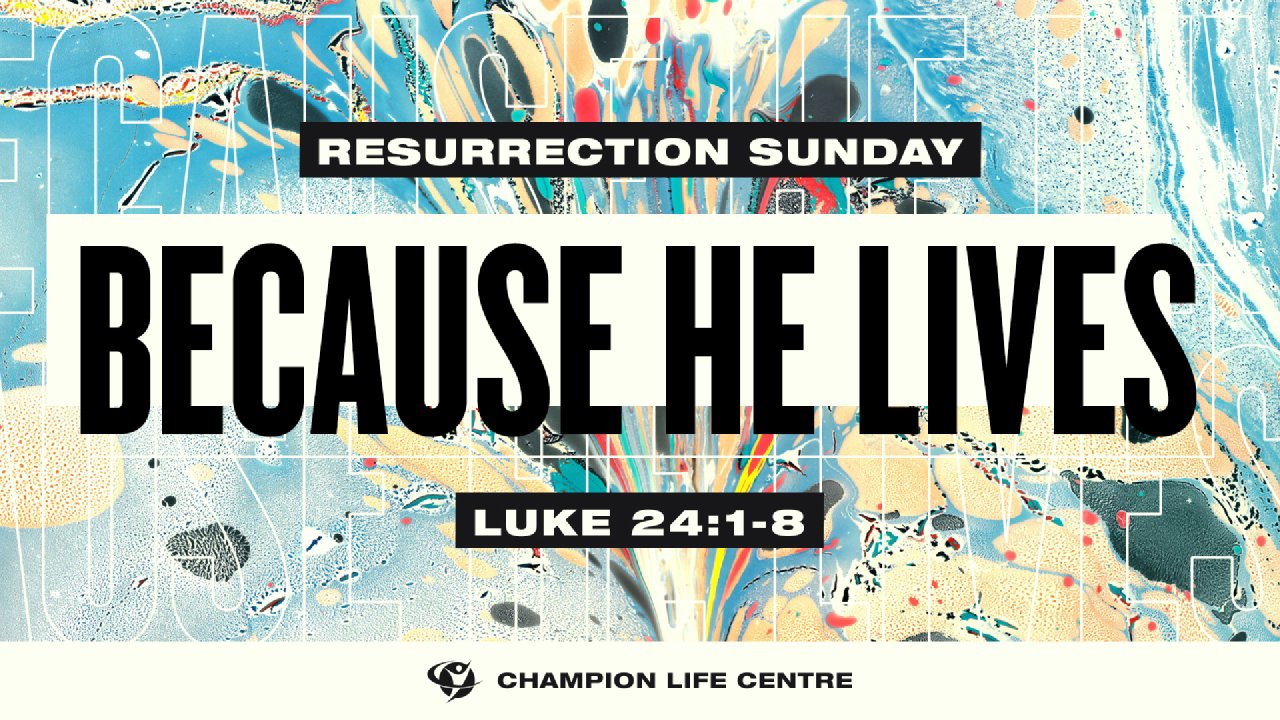 Easter - Resurrection Sunday: Because He Lives

Communion Sunday + Message Message Title: BECAUSE HE LIVES Message Text: Luke 24:1-8 1 On the first day of the week, very early in the morning, the women took the spices they had prepared and went to the tomb. 2 They found the stone rolled away from the tomb, 3 but when they entered, they did not find the body of the Lord Jesus. 4 While they were wondering about this, suddenly two men in clothes that gleamed like lightning stood beside them. 5 In their fright the women bowed down with their faces to the ground, but the men said to them, "Why do you look for the living among the dead? 6 He is not here; he has risen! Remember how he told you, while he was still with you in Galilee: 7'The Son of Man must be delivered into the hands of sinful men, be crucified and on the third day be raised again.'" 8 Then they remembered his words. 1 Corinthians 15:14 NIV And if Christ has not been raised, our preaching is useless and so is your faith. Luke 24:5-8 “…..Why do you seek the living among the dead? 6 He is not here, but is risen! Remember how He spoke to you when He was still in Galilee, 7 saying, 'The Son of Man must be delivered into the hands of sinful men, and be crucified, and the third day rise again.' " 8 And they remembered His words. Isaiah 53:4-5 “Surely he took up our infirmities and carried our sorrows, yet we considered him stricken by God, smitten by him, and afflicted. 5 But he was pierced for our transgressions, he was crushed for our iniquities; the punishment that brought us peace was upon him, and by his wounds we are healed. Acts 2:24 “But God raised Him from the dead, freeing Him from the agony of death, because it was impossible for death to keep its hold on Him.” Because He Lives … – Your Faith is Strengthened Luke 24:46-48 46 He told them, "This is what is written: The Christ will suffer and rise from the dead on the third day, 47 and repentance and forgiveness of sins will be preached in his name to all nations, beginning at Jerusalem. 48 You are witnesses of these things. 2 Tim 1:12 12 That is why I am suffering as I am. Yet I am not ashamed, because I know whom I have believed, and am convinced that he is able to guard what I have entrusted to him for that day. – Your Freedom is Set Luke 4:18-19 18 "The Spirit of the Lord is on me, because he has anointed me to preach good news to the poor. He has sent me to proclaim freedom for the prisoners and recovery of sight for the blind, to release the oppressed, 19 to proclaim the year of the Lord's favor." Luke 13:10-13 10 On a Sabbath Jesus was teaching in one of the synagogues, 11 and a woman was there who had been crippled by a spirit for eighteen years. She was bent over and could not straighten up at all. 12 When Jesus saw her, he called her forward and said to her, "Woman, you are set free from your infirmity." 13 Then he put his hands on her, and immediately she straightened up and praised God. Gal 5:1 5:1 It is for freedom that Christ has set us free. Stand firm, then, and do not let yourselves be burdened again by a yoke of slavery. – Your Future is Secured John 14:1-4, 6 "Do not let your hearts be troubled. Trust in God; trust also in me. 2 In my Father's house are many rooms; if it were not so, I would have told you. I am going there to prepare a place for you. 3 And if I go and prepare a place for you, I will come back and take you to be with me that you also may be where I am. 4 You know the way to the place where I am going." “I am the way, truth, and Life, no one comes to the Father except by me.” WWW.CHAMPIONLIFE.CA Recorded via Facebook Live Stream from CLC – Brampton April 12, 2020 end