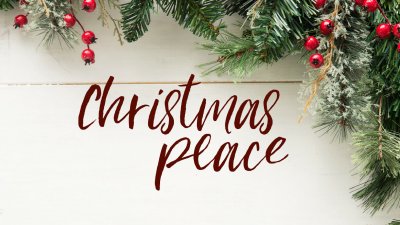 The Presence of Peace

Love has come! John 1:14-18 says, "And the Word became flesh and dwelt among us, and we have seen his glory, glory as of the only Son from the Father, full of grace and truth. (John bore witness about him, and cried out, “This was he of whom I said, ‘He who comes after me ranks before me, because he was before me.’”). For from his fullness we have all received, grace upon grace. For the law was given through Moses; grace and truth came through Jesus Christ. No one has ever seen God; the only God, who is at the Father's side, he has made him known.

The Proclamation of Peace

And in the same region there were shepherds out in the field, keeping watch over their flock by night. And an angel of the Lord appeared to them, and the glory of the Lord shone around them, and they were filled with great fear. And the angel said to them, “Fear not, for behold, I bring you good news of great joy that will be for all the people. For unto you is born this day in the city of David a Savior, who is Christ the Lord. And this will be a sign for you: you will find a baby wrapped in swaddling cloths and lying in a manger.” And suddenly there was with the angel a multitude of the heavenly host praising God and saying, “Glory to God in the highest, and on earth peace among those with whom he is pleased!” —Luke 2:8-14

The Place of Peace

The prophet Micah wrote during difficult days in the history of the Jewish nation. Crime was rampant, greed was everywhere, Judah's leaders were cruel, and righteousness was nowhere to be found. Yet God inspired Micah to encourage the nation with the truth that someone was coming who would change the world.

The Promise of Peace

Where can we find peace today? What can it look like? Does it even exist? This Christmas we invite you to rediscover peace at Calvary Burlington. Each week we'll focus on the topic of peace as reflected in the account of Jesus' birth. Today we begin by looking at Isaiah 9:7 and the prophecy of the Messiah's birth.