Advent at the Bible Church 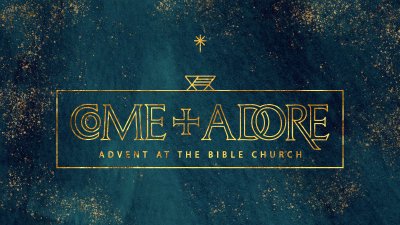 Genesis 3:14–15 [14] The LORD God said to the serpent, “Because you have done this, cursed are you above all livestock and above all beasts of the field; on your belly you shall go, and dust you shall eat all the days of your life. [15] I will put enmity between you and the woman, and between your offspring and her offspring; he shall bruise your head, and you shall bruise his heel.” (ESV) Revelation 21:1–4 [1] Then I saw a new heaven and a new earth, for the first heaven and the first earth had passed away, and the sea was no more. [2] And I saw the holy city, new Jerusalem, coming down out of heaven from God, prepared as a bride adorned for her husband. [3] And I heard a loud voice from the throne saying, “Behold, the dwelling place of God is with man. He will dwell with them, and they will be his people, and God himself will be with them as their God. [4] He will wipe away every tear from their eyes, and death shall be no more, neither shall there be mourning, nor crying, nor pain anymore, for the former things have passed away.” (ESV)

Luke 24:44–49 [44] Then he said to them, “These are my words that I spoke to you while I was still with you, that everything written about me in the Law of Moses and the Prophets and the Psalms must be fulfilled.” [45] Then he opened their minds to understand the Scriptures, [46] and said to them, “Thus it is written, that the Christ should suffer and on the third day rise from the dead, [47] and that repentance for the forgiveness of sins should be proclaimed in his name to all nations, beginning from Jerusalem. [48] You are witnesses of these things. [49] And behold, I am sending the promise of my Father upon you. But stay in the city until you are clothed with power from on high.” (ESV) Colossians 2:1–3 [1] For I want you to know how great a struggle I have for you and for those at Laodicea and for all who have not seen me face to face, [2] that their hearts may be encouraged, being knit together in love, to reach all the riches of full assurance of understanding and the knowledge of God's mystery, which is Christ, [3] in whom are hidden all the treasures of wisdom and knowledge. (ESV)

Matthew 22:34–40 [34] But when the Pharisees heard that he had silenced the Sadducees, they gathered together. [35] And one of them, a lawyer, asked him a question to test him. [36] “Teacher, which is the great commandment in the Law?” [37] And he said to him, “You shall love the Lord your God with all your heart and with all your soul and with all your mind. [38] This is the great and first commandment. [39] And a second is like it: You shall love your neighbor as yourself. [40] On these two commandments depend all the Law and the Prophets.” (ESV)

John 1:1–18 [1] In the beginning was the Word, and the Word was with God, and the Word was God. [2] He was in the beginning with God. [3] All things were made through him, and without him was not any thing made that was made. [4] In him was life, and the life was the light of men. [5] The light shines in the darkness, and the darkness has not overcome it. [6] There was a man sent from God, whose name was John. [7] He came as a witness, to bear witness about the light, that all might believe through him. [8] He was not the light, but came to bear witness about the light. [9] The true light, which gives light to everyone, was coming into the world. [10] He was in the world, and the world was made through him, yet the world did not know him. [11] He came to his own, and his own people did not receive him. [12] But to all who did receive him, who believed in his name, he gave the right to become children of God, [13] who were born, not of blood nor of the will of the flesh nor of the will of man, but of God. [14] And the Word became flesh and dwelt among us, and we have seen his glory, glory as of the only Son from the Father, full of grace and truth. [15] (John bore witness about him, and cried out, “This was he of whom I said, ‘He who comes after me ranks before me, because he was before me.’”) [16] For from his fullness we have all received, grace upon grace. [17] For the law was given through Moses; grace and truth came through Jesus Christ. [18] No one has ever seen God; the only God, who is at the Father's side, he has made him known. (ESV) Genesis 1:1–2 [1] In the beginning, God created the heavens and the earth. [2] The earth was without form and void, and darkness was over the face of the deep. And the Spirit of God was hovering over the face of the waters. (ESV)