The Promises of Christmas 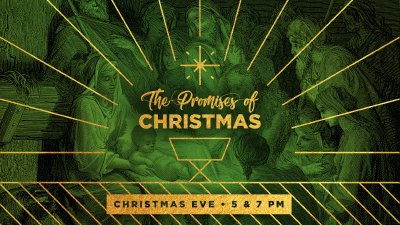 2018 Christmas Eve - The Promise Foretold, Fulfilled, and For Us 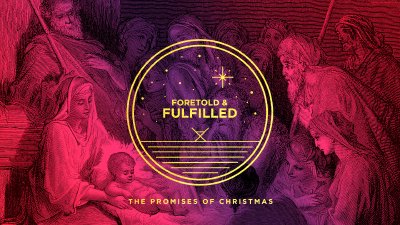 John 1:29–34 [29] The next day he saw Jesus coming toward him, and said, “Behold, the Lamb of God, who takes away the sin of the world! [30] This is he of whom I said, ‘After me comes a man who ranks before me, because he was before me.’ [31] I myself did not know him, but for this purpose I came baptizing with water, that he might be revealed to Israel.” [32] And John bore witness: “I saw the Spirit descend from heaven like a dove, and it remained on him. [33] I myself did not know him, but he who sent me to baptize with water said to me, ‘He on whom you see the Spirit descend and remain, this is he who baptizes with the Holy Spirit.’ [34] And I have seen and have borne witness that this is the Son of God.” (ESV)

Everything In Him & For Him

John 1:1–18 [1] In the beginning was the Word, and the Word was with God, and the Word was God. [2] He was in the beginning with God. [3] All things were made through him, and without him was not any thing made that was made. [4] In him was life, and the life was the light of men. [5] The light shines in the darkness, and the darkness has not overcome it. [6] There was a man sent from God, whose name was John. [7] He came as a witness, to bear witness about the light, that all might believe through him. [8] He was not the light, but came to bear witness about the light. [9] The true light, which gives light to everyone, was coming into the world. [10] He was in the world, and the world was made through him, yet the world did not know him. [11] He came to his own, and his own people did not receive him. [12] But to all who did receive him, who believed in his name, he gave the right to become children of God, [13] who were born, not of blood nor of the will of the flesh nor of the will of man, but of God. [14] And the Word became flesh and dwelt among us, and we have seen his glory, glory as of the only Son from the Father, full of grace and truth. [15] (John bore witness about him, and cried out, “This was he of whom I said, ‘He who comes after me ranks before me, because he was before me.’”) [16] For from his fullness we have all received, grace upon grace. [17] For the law was given through Moses; grace and truth came through Jesus Christ. [18] No one has ever seen God; the only God, who is at the Father's side, he has made him known. (ESV)

Exodus 19:5-6 [5] Now therefore, if you will indeed obey my voice and keep my covenant, you shall be my treasured possession among all peoples, for all the earth is mine; [6] and you shall be to me a kingdom of priests and a holy nation.’ These are the words that you shall speak to the people of Israel.” (ESV) Isaiah 53:1-6 [1] Who has believed what he has heard from us? And to whom has the arm of the LORD been revealed? [2] For he grew up before him like a young plant, and like a root out of dry ground; he had no form or majesty that we should look at him, and no beauty that we should desire him. [3] He was despised and rejected by men, a man of sorrows and acquainted with grief; and as one from whom men hide their faces he was despised, and we esteemed him not. [4] Surely he has borne our griefs and carried our sorrows; yet we esteemed him stricken, smitten by God, and afflicted. [5] But he was pierced for our transgressions; he was crushed for our iniquities; upon him was the chastisement that brought us peace, and with his wounds we are healed. [6] All we like sheep have gone astray; we have turned—every one—to his own way; and the LORD has laid on him the iniquity of us all. (ESV)

Genesis 3:1–15 [1] Now the serpent was more crafty than any other beast of the field that the LORD God had made. He said to the woman, “Did God actually say, ‘You shall not eat of any tree in the garden’?” [2] And the woman said to the serpent, “We may eat of the fruit of the trees in the garden, [3] but God said, ‘You shall not eat of the fruit of the tree that is in the midst of the garden, neither shall you touch it, lest you die.’” [4] But the serpent said to the woman, “You will not surely die. [5] For God knows that when you eat of it your eyes will be opened, and you will be like God, knowing good and evil.” [6] So when the woman saw that the tree was good for food, and that it was a delight to the eyes, and that the tree was to be desired to make one wise, she took of its fruit and ate, and she also gave some to her husband who was with her, and he ate. [7] Then the eyes of both were opened, and they knew that they were naked. And they sewed fig leaves together and made themselves loincloths. [8] And they heard the sound of the LORD God walking in the garden in the cool of the day, and the man and his wife hid themselves from the presence of the LORD God among the trees of the garden. [9] But the LORD God called to the man and said to him, “Where are you?” [10] And he said, “I heard the sound of you in the garden, and I was afraid, because I was naked, and I hid myself.” [11] He said, “Who told you that you were naked? Have you eaten of the tree of which I commanded you not to eat?” [12] The man said, “The woman whom you gave to be with me, she gave me fruit of the tree, and I ate.” [13] Then the LORD God said to the woman, “What is this that you have done?” The woman said, “The serpent deceived me, and I ate.” [14] The LORD God said to the serpent, “Because you have done this, cursed are you above all livestock and above all beasts of the field; on your belly you shall go, and dust you shall eat all the days of your life. [15] I will put enmity between you and the woman, and between your offspring and her offspring; he shall bruise your head, and you shall bruise his heel.” (ESV)