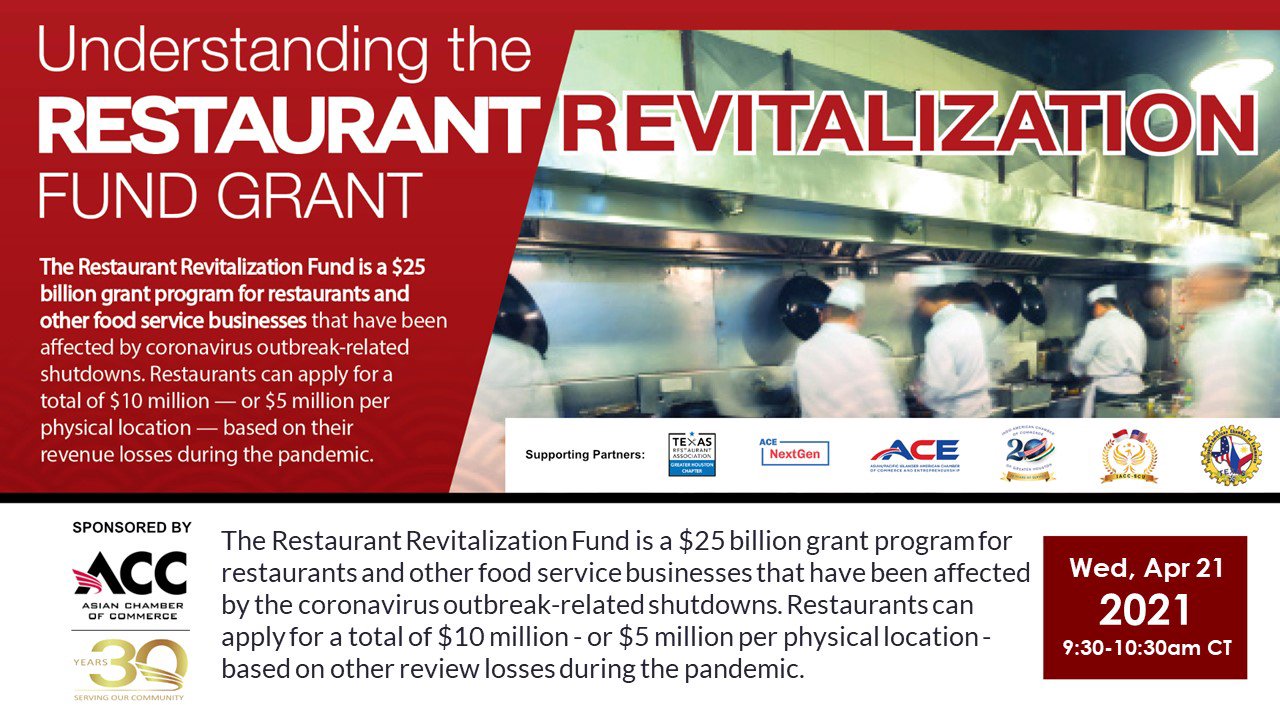 The Restaurant Revitalization Fund is a $25 billion grant program for restaurants and other food service businesses that have been affected by the coronavirus outbreak-related shutdowns. Restaurants can apply for a total of $10 million - or $5 million per physical location - based on other review losses during the pandemic. This is part of the restaurant Series 2021. Sign up for the program: https://asianchamber-hou.org/restaurantseries 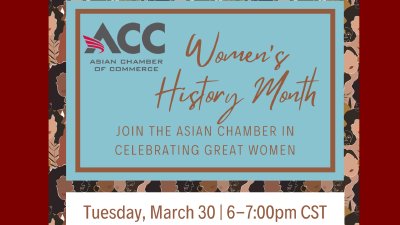 In celebrating Women's History Month in March, the Asian Chamber of Commerce is highlighting women who have made a difference in our community. Join ACC Board Member, Dr. Dalia Sherif, lead a discussion with two amazing pioneer of diversity and equality. Speakers: DR. JIA WANG Professor in the Adult Education and Human Resource Development Program at Texas A&M University - College Station CARLECIA WRIGHT Chief Diversity Officer at Lone Star College 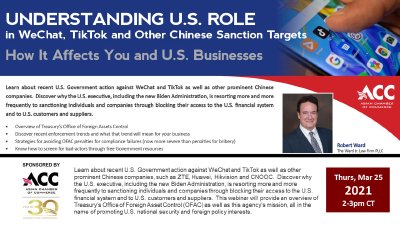 Learn about recent U.S. Government action against WeChat and TikTok as well as other prominent Chinese companies, such as ZTE, Huawei, Hikvision and CNOOC. Discover why the U.S. executive, including the new Biden Administration, is resorting more and more frequently to sanctioning individuals and companies through blocking their access to the U.S. financial system and to U.S. customers and suppliers. This webinar will provide an overview of Treasury's Office of Foreign Asset Control (OFAC) as well as this agency's mission, all in the name of promoting U.S. national security and foreign policy interests. A review of recent enforcement actions will provide participants with lessons learned and strategies for avoiding draconian OFAC penalties (now more severe than penalties for bribery)! With the rise of domestic terrorism in addition to long-standing threats from abroad, knowing how to screen for bad-actors through free Government resources can help domestic as well as globally deployed businesses avoid having their accounts and assets frozen. Speaker: Robert has over thirty-two years of experience as an international trade law attorney, having worked for three of the big four consulting firms as well as two Fortune 200 companies and a half dozen Fortune 500 companies. He has served as Chief Compliance Officer for the world's largest maritime services company as well as for a globally deployed oil and gas telecommunications start-up company. He is graduate of Notre Dame and of Tulane Law School along with an LL.M. from the UH Law Center. In addition, Robert is a Certified U.S. Export Compliance Officer as well as a Licensed U.S. Customs Broker. 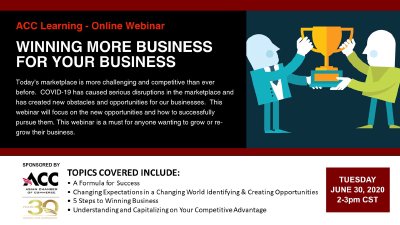 Today's marketplace is more challenging and competitive than ever before. COVID-19 has caused serious disruptions in the marketplace and has created new obstacles and opportunities for our businesses. This webinar will focus on the new opportunities and how to successfully pursue them. This webinar is a must for anyone wanting to grow or re-grow their business. TOPICS COVERED INCLUDE: • A Formula for Success • Changing Expectations in a Changing World Identifying & Creating Opportunities • 5 Steps to Winning Business • Understanding and Capitalizing on Your Competitive Advantage